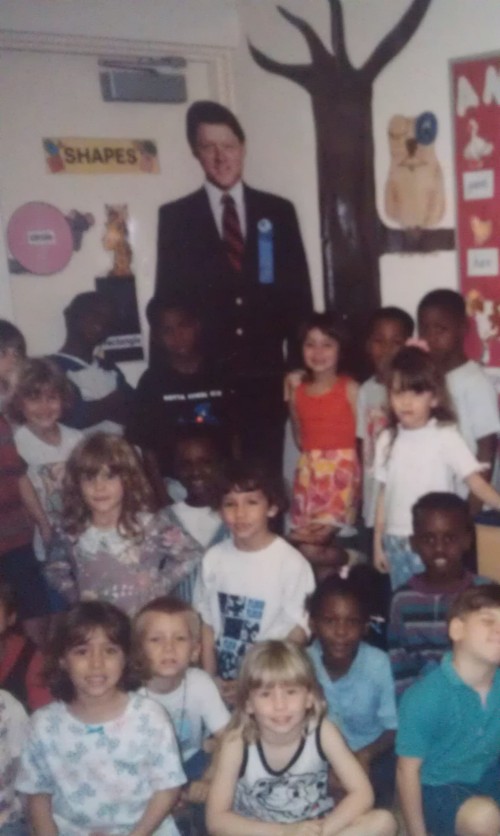 I admit that over the years I have become increasingly enamored of politics and the guiding and misguiding effect it has on us all.  It is no secret then that I woke early today to turn on the news so I wouldn’t miss anything.  Watching a reminiscent clip of past inaugurations – my first kindergarten classroom and one particular student came to mind.  The year was 1993 and I was thrilled to accept a cardboard replica of President Clinton for my classroom.  Of course, I had to take a picture of my students with the president’s replica and share some of the presidential stories I heard.  My favorite story to share with my students that day was the fact that several of President Clinton’s kindergarten friends were serving on his White House staff.

“Look around at your friends,” I enthusiastically said.  “One of you could be president one day and call on some of your kindergarten friends to work with you!”

“I can’t be president,” said Kendrick.

“Why would you say that?”  I naively asked.

He shrugged his shoulders, looked up at me and said, “Black people can’t be president.”

My heart sank and with it the idealistic joy I had for teaching was shadowed by the stark social reality of the time.  I hugged him and said, “You can be anything you want to be if you work hard for it.”

I have thought of Kendrick often over the years, but never as much as I did on the day watching President Obama’s first inauguration with a new generation of students.  I am thinking of Kendrick today – wondering if he remembers that day in 1993 and remaining hopeful that he finds as much joy in this week’s inaugural events as I do.

I don't sew, but I write -- patching together pieces of my life.

Come Join Us as We Begin Our Marriage Journey

Welcome to your new home on WordPress.com

if all else fails...use a hammer

an exercise in percussive maintenance

What I think about. Things that happen to me. Stuff I like. And other things.